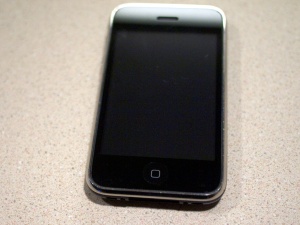 My daughter’s hand-me-down iPhone 3G has had a bad battery for awhile, but it hasn’t been an issue until now, as we will be traveling this week. I have extensive experience opening up Apple computers and gadgets, going back as far as 2003 when I upgraded the hard drive in my white iBook G3 to a whopping 60 GB. The only time I ever opened up an iPhone before was once to replace the back panel of an iPhone 4. I’d never tinkered with the guts of an iPhone before, but since this was just an old iPhone 3G I figured it was low risk. This iPhone is really a spare anyway. 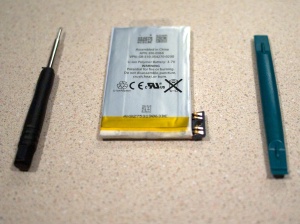 So I decided to replace the battery myself, and ordered a replacement battery from ifixit.com. It arrived in only a few days. I was excited to get started, so I didn’t bother reading the instructions before removing the two screws on the bottom of the iPhone. Then I already hit a wall and had to read the directions– I realized I didn’t know where the iPhone display separates from the bottom! After reviewing the directions, I read that the display is only the part of the phone inside the chrome bezel. Then I hit another stumbling block– how do I open the phone? Do I pry it open like my old 2nd gen iPod? Turns out I need a suction cup or duct tape to adhere to the screen so it can be pulled off. I really wish that information was more obvious, but I blame myself for not reading the instructions. I searched the apartment for about a half hour before I finally found something with a suction cup. 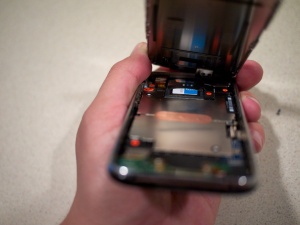 I used the plastic holder for a shaver in the shower to pull of the display, and it came off fairly easily. The risk in that step is if you pull too hard you might rip out the cables that connect the display to the logic board.

Once the iPhone was opened up, I followed the directions on ifixit.com to disconnect the tiny cables, remove the correct screws, and then pull out the logic board. Whenever there are lots of screws are being removed, it’s critically important to know where they go when it’s time to put them back in. For this project, I  laid all the screws off to the side, in a pattern matching where they came from, so they look like a connect the dots puzzle. Removing the battery was tricky because it is glued to the back of the phone. I just kept prying and wiggling until it came out. I made sure not to apply to much pressure with the spudger tool because I was concerned that it might snap under pressure, but it survived. 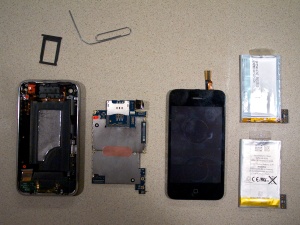 The new battery came with adhesive already applied to the back of it, so I just removed the 3M backing and carefully put the battery back into it’s snug little spot. Then I began the reassembly process, putting the logic board back into it’s spot, and screwing it in. The nice thing about reassembling the iPhone 3G is that every part has it’s place with no wiggle room, so it was obvious when the battery and logic board were back in place. The hardest component to put back in it’s place is cable #3, which just slides into it’s little spot on the logic board. All the cables snap into place except this one. I used a tweezer to push it back in because it was not possible to do with my fingers. Once all the cables were in place, I decided to test it out and turn on the phone to check that everything works before closing up the case. Just then I decided to help my wife out and hold my 4-month-old baby so she could do whatever she needed to get done at that time. I plugged in the phone because I didn’t know if the battery would have a charge. I powered on the phone, and the touch screen and everything was working, and then all of a sudden the baby I was carrying grabbed the iPhone power cord and sent the phone flying to the ground, and the screen was pulled off! So I put my son down, and worked for another 20 minutes getting that pesky #3 cable in it’s spot and test everything and promptly completed the reassembly once I saw that the screen worked as it should. I wonder how the iPhone software deals with the screen disconnecting while it’s powered on? 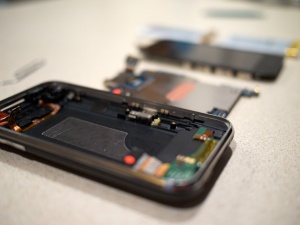 Replacing the battery on the iPhone 3G was fairly easy to do. The trickiest part is the #3 cable that you have to push into it’s tiny slot. I also stripped one of the screws, but I figure that to be a fluke thing. I would recommend others that are comfortable opening up their electronics to make this repair.

A gamer since 1986. Photographer. iOS Developer. Web Developer and Designer.

View all of barryjbro's posts.